I’m not sure what the people now occupying Wall Street ultimately will accomplish, but I’m a little tired with the argument that, because we don’t know what they may or may not accomplish, the entire exercise is doomed and useless. There has to be something to be said for people who at least direct their anger at the people who deserve it…
__
For example, there is nothing that proves the essential fraudulence of the trope that the Tea Party “Movement” is some sort of spontaneous uprising, and not simply the well-funded re-branding of right-wing Republicanism aimed at a new crop of rubes, than the fact that there is little or no Tea Party presence on Wall Street. That is where the people who created the financial crisis work. That’s the scene of the crime. The wreckage of so many lives emanates from there, not from Washington. But the Tea Party is far more concerned with making sure that the Kenyan usurper in the White House gets run out of town on a rail, and the Tea Party’s heroes are roaming the landscape, talking rot, while the real villains are still yapping about how hard things are all over the place. Thank Whoever that there’s at least a few people who will stand outside of the right buildings and yell.

Mitt Romney keeps emphasizing his relative lack of governing experience, and in each telling his political virginity gets a bit more pure than in the last…
__
I believe Jonathan Last put it best: “Mitt Romney would have been a career politician too, if only voters would have let him.” The man lost a Senate race in 1994, eked out a win for governor in 2002, abandoned his office in 2006 when polls showed him trailing, and lost a presidential race in 2008, from which he’s been running continuously since.
__
Romney doesn’t have a political career in the same sense that William Hung doesn’t have a music career. It’s not because he’s above it.

END_OF_DOCUMENT_TOKEN_TO_BE_REPLACED

That’s what Jim Hightower said were “the only things found in the middle of the road.” Frank Rich at NYMag teases out the bad choices and/or dishonesty behind the latest Media Village outbreak of “bipartisanship” fervor:

…[T]he The first trial balloon, all but bursting with hot air, was the announcement of an organization called No Labels last December. Venerating the “vital center” and vilifying “hyperpartisanship,” No Labels was endorsed by Michael Bloomberg, the former George W. Bush operative Mark McKinnon, and MSNBC’s bipartisan-minded morning talk show Morning Joe, which celebrated No Labels’ opening festival of civic-minded treacle as if it were the birth of the United Nations. Among the star attractions was Evan Bayh, the former Democratic senator from Indiana, a Broder-anointed patron saint of bipartisanship who quit the Senate in 2010 after writing a self-martyring Times op-ed whining about congressional dysfunction… Bayh has since elucidated his definition of bipartisanship by signing on as a talking head at that haven of nonideological civility, Fox News, and by partnering with the former Bush chief of staff Andy Card on a Chamber of Commerce–sponsored “bipartisan” road tour opposing EPA regulations on smog-producing ozone. No Labels, meanwhile, has gone on to create a blog that awards “high-fives” to politicians upholding its content-free ideals. Among the winners have been Boehner (for asking his caucus to show up for Obama’s address to Congress) and Gabrielle Giffords (for showing up to vote for the debt-ceiling bill). While Woody Allen may be right that 80 percent of success is showing up, if that’s now the high bar for a functioning government, America can pack it in.
__
No Labels has since been joined by two other bipartisan campaigns, both with prominent liberal supporters and both poised to damage Obama in 2012. One is the brainchild of Howard Schultz, the CEO of Starbucks, which, in a perhaps unintended bit of cultural synergy, is also the signature sponsor of Morning Joe. Schultz took a full-page ad in the Times this month to nationalize his crusade… for a moratorium on campaign contributions to protest “irresponsibility among elected officials” who “have put partisan agendas before the people’s agenda.” Exactly which “people” he means isn’t clear—presumably those who share his own largely Democratic orthodoxy—but his scheme was promptly embraced by Times columnists (not Krugman!) and by No Labels, which recruited him for a national teleconference. Schultz boasts of being “overwhelmed” with support and of recruiting some 100 CEOs to sign his no-giving pledge. USA Today, digging deeper, discovered that most of those 100 executives had given less than $5,000 or nothing at all to politicians in recent years. Somewhere the Koch brothers, pouring millions into the tea-party coffers to further the agenda of their own “people,” are laughing at this decaffeinated exercise in unilateral political disarmament.
__

END_OF_DOCUMENT_TOKEN_TO_BE_REPLACED

Scott Walker wants you to forget that he slashed the budget, lied about his reasons for doing so (Spoiler alert! – it was never about the budget), and then stealthily passed a union-busting bill (despite Democrats had fled the state to forestall the passage of that bill), all in the name of union-busting.

Oh, and let’s not forget about that prank call in which Scott Walker thought he was talking to David Koch, and proceeded to demonstrate how throbbing a Koch-knocker he is.

Well, all of that happened about six months ago, and I reckon Scott Walker thinks that we’ve all forgotten about it.  We’ve moved on. No big whoop.

Not so fast, pal.

Sarah Jones at Politicusa has a must-read story about the effect that Walker’s Koch-infested union-busting budget bill has had on job creation. Needless to say, it’s not good news for Walker:

END_OF_DOCUMENT_TOKEN_TO_BE_REPLACED

Walking among their passengers: 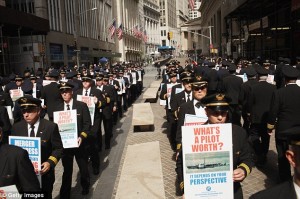 Over 700 hundred activists, represented by the Air Line Pilots Association (ALPA) carriers, took their grievances to the streets as they protested for wages and benefits in light of a stalled merger between the airlines.

Using the image from the “Miracle on the Hudson” was clever. The Postal Workers were out yesterday, too. If this keeps up, we’ll all be able to find a picket line to join.

END_OF_DOCUMENT_TOKEN_TO_BE_REPLACED

This is just crazy:

In the United States — with almost 400,000 annual detentions in 2010, up from 280,000 in 2005 — private companies now control nearly half of all detention beds, compared with only 8 percent in state and federal prisons, according to government figures. In Britain, 7 of 11 detention centers and most short-term holding places for immigrants are run by for-profit contractors.

The only thing crazier to me than outsourcing prisons to private contractors is outsourcing military work, and we do both with gusto.

END_OF_DOCUMENT_TOKEN_TO_BE_REPLACED

On the unemployment front:

The number of Americans filing for their first week of unemployment benefits fell last week to the lowest level in nearly six months, possibly signaling slight improvement in the job market.

The drop was much better than expected, as economists forecast initial claims to fall to 419,000, according to Briefing.com.

New claims for unemployment benefits have stuck around or above 400,000 since early April, a level economists often say is too high to signal the unemployment rate will come down anytime soon.

At the very bottom of the CNN piece (so far down I almost didn’t read it because I thought it was an ad) was a brief mention that while unemployment is high, there are still three million unfulfilled jobs because employers can not find skilled employees. Those jobs include Advanced Manufacturing Engineer, truck drivers, nurses, professional cooks, aircraft mechanics, accountants, and, believe it or not, web developers.

END_OF_DOCUMENT_TOKEN_TO_BE_REPLACED

Expert testimony before the Michigan statehouse:

Charter schools have strayed so far from their original intent that they should be renamed “corporate” or “franchise” schools instead, a Western Michigan University professor told a state Senate Committee.

Western professor Gary Miron, who is nationally known for his charter school research, told the committee that the schools have strayed far from their original intent of being innovative, locally operated alternatives to traditional schools.

“They’ve gone away from those original charter ideas to the point that they should probably be called ‘corporate’ schools or ‘franchise’ schools instead,” Miron told the senators. “I like charter schools. I like the notion of charter schools. But what we’re talking about now is something that is very different. We need to go back to the original intent and goals.”

Miron said for-profit management companies dominate the charter landscape, and exercise such control over schools that local boards of education overseeing the schools have difficulty expressing authority or autonomy. Miron said that while traditional schools tend to be segregated, but charters have “accelerated” the segregation on terms of race, class, special needs and language. He said research shows there are few charter schools that show students performing higher than nearby districts.

I would suggest to Professor Miron that there isn’t going to be any re-regulation of public schools in Michigan. I think I can tell him what happened to his reform movement, too. We deregulated schools, Republicans took statehouses in Michigan and Ohio, moved quickly to get those pesky unions out of the way, and we’re now going full-steam ahead on privatization.

I particularly love how lobbyists and others have taken “school choice” and turned it into a mandate:

require all districts to participate in a school choice program

It’s called bait and switch, Professor Miron, and the people that live here are finding it very difficult to push back against the massive amounts of out-of-state money that is directed at destroying unions and leaving the field clear to privatize our public schools.

This is from Dr. Miron’s testimony before the US House, in June of this year (pdf):

Claims regarding privatization remain rhetorical and unsupported by evidence. The recent economic crisis has shown that our economy requires greater public oversight and regulations, a finding that can be reasonably extended to markets in education.

Strong and effective lobbying and advocacy groups for charter schools quickly reinterpret research and shape the message to fit their needs rather than the long-term interests of the movement. They attack evidence that questions the performance of charter schools and offer anecdotal evidence, rarely substantiated by technical reports, in rebuttal. Such lobbying has undermined reasoned discourse and made improving charter schools more difficult.

While he’s wondering who stole his charter schools, I’m wondering who is stealing my public schools, and is it too late to stop them? I appreciate his honesty and integrity at admitting these realities, and I believe he was and is well-intentioned. I just don’t believe reality and honesty and integrity and good intentions are going to prevail up against all that money.