END_OF_DOCUMENT_TOKEN_TO_BE_REPLACED

Christion’s father died last night and we just found out early afternoon, so I’m going to be scarce for a few days.

END_OF_DOCUMENT_TOKEN_TO_BE_REPLACED

BREAKING: @BernieSanders camp asks for (and gets) another 45-day extension on filing personal financial disclosure pic.twitter.com/QUdjX6Dy8J

It’s difficult to take a candidate seriously on campaign finance reform when he finds every excuse not to provide his financial information.

Hilbot though I be, I seriously doubt there’s anything revelatory in the Sanders campaign finances beyond their embarrassing amateurism. The Senator has been puttering happily along in his Green Mountain fiefdom for many years, from the evidence so far on the record-keeping equivalent of a three-ring binder ledger and a cigar box marked Petty Cash. It’s never been a big deal for his staff to back-reconcile a bunch of line items for Misc and Other at the end of the financial year. And a government salary that seems paltry to Congressfolk from states like New York or California is comparative wealth in poor underpopulated Vermont — unless he’s made some spectacularly bad investments or nursed some unsuspected high-dollar addiction, Bernie’s no doubt set aside a tidy sum for his retirement and his kids. Knowledgeable numbers people have speculated he might even be a millionaire, on paper… no crime, even for a politician, but an embarrassing reveal for someone running as The Populist Peoples’ Candidate.

Bernie never expected his campaign to go beyond drawing attention to his favorite issues; he certainly didn’t prepare in advance for the scrutiny that comes with a real presidential campaign. His troops were heavy on enthusiasm, light on experience / expertise. There’s bound to be a certain amount of under-documentation, some questionable overspending, maybe even a little of the impulsive hand-in-the-cash-drawer minor splurges that drew so much attention to the Palin family in the summer of 2008. Nothing — up till now — that would draw more than a stern rebuke and maybe some fines from the FEC…

VP Biden in sit down interview with us just now: "I've talked to Bernie. Bernie is going to endorse her." @NPRWeekend

Bernie Sanders is making a big and potentially dangerous mistake with his continuing insistence on changes to the Democratic Party’s rules and platform. I should know. As chairman of Al Gore’s 2000 presidential campaign, I understand too well where such ideological stubbornness can lead.

Back then, many progressives insisted on backing third-party candidate Ralph Nader despite warnings it would undercut the Democratic nominee. Nader received 97,421 votes in Florida, which Gore lost by 537 votes. The result? President George W. Bush, who championed ill-advised tax cuts, the invasion of Iraq and other actions we now deeply regret.

Sanders made an energetic bid for the Democratic nomination, drawing big crowds and fueling debates on important topics such as income disparity. Although he lost to Hillary Clinton, Sanders is pushing his agenda to the party convention and insisting on “reforms” in a Democratic nominating process he describes as seriously defective.

Key Democratic constituencies, including the Congressional Black Caucus and Congressional Hispanic Caucus, strongly support superdelegates. “Our delegate selection process is not rigged,” Rep. James E. Clyburn (S.C.), a senior leader of the Black Caucus, wrote in a letter to colleagues. “It is transparent to the public and open for participation.”

Clinton beat Sanders fair and square. She won more states, more delegates (pledged and super), and 3.7 million more votes than he did…

… Democrats have won the popular vote in five of the last six presidential elections. In 2008, after losing a hard-fought primary to Barack Obama, Clinton promptly endorsed him and campaigned for him. In contrast, Sanders — who refused to even call himself a Democrat until this election — has yet to endorse Clinton. He says she, not he, is responsible for persuading his supporters to back her.

Every vote counts. Sanders should accept the primary outcome and enthusiastically rally his supporters to Clinton’s side to avoid a catastrophic Donald Trump presidency.

END_OF_DOCUMENT_TOKEN_TO_BE_REPLACED

Speaking of behavior that is not at all weird or creepy, here’s a new report from Olivia Nuzzi, in GQ, on “Donald Trump’s Right-Hand Woman“:

… Hicks is a product not of Washington but of the Trump Organization, a marble-walled universe where one’s delightful agreeability and ferocious loyalty are worth more than conventional experience. She is a hugger and a people pleaser, with long brown hair and green eyes, a young woman of distinctly all-American flavor — the sort that inspires Tom Petty songs, not riots. And yet Hicks has, almost by accident, helped architect the strangest and least polite campaign in modern American history.

I wanted Hicks to help me understand just how all this had come to pass, how a person who’d never worked in politics had nonetheless become the most improbably important operative in this election. But she declined my request to talk. Instead, she arranged something more surreal: I could talk about her with Donald Trump, in front of her.

Trump, of course, has little experience with subjects other than Trump, which he made clear when I asked him about Hicks’s quick ascent to his inner circle. “Bill O’Reilly last night said it is the greatest political event in his lifetime,” Trump said, exaggerating O’Reilly’s point. “The most incredible political event in his lifetime! That’s pretty big. You know, who knew this was going to happen? So…” He pivoted, reluctantly, to the topic at hand. “Hope’s been involved from the beginning, and she has been absolutely terrific.”

Hicks’s job—a sui generis role of outsize importance that she half invents on the fly—involves keeping the media at bay and operating as Trump’s chief gatekeeper. But she’s also summoned in critical moments of confusion to play instigator and score-settler. It was her job to facilitate Trump’s rebuke of the Pope after His Holiness questioned the Christianity of anybody who would build a border wall (kind of Trump’s thing). And it was she who helped malign a female reporter who’d been manhandled by Trump’s campaign manager, immediately claiming she was a lying attention hound. Hicks was also called on this spring to explain why Trump, over the course of three days, advocated four positions on abortion. She tried without success to quell the confusion, declaring, finally, that President Trump would end abortion, simple as that: “He will change the law through his judicial appointments and allow the states to protect the unborn.”…

Hicks’s big job in politics started—not that long ago—with a comparatively tiny gig in Trump Tower. In 2012, two years after she’d graduated from Southern Methodist, Hicks was working for a New York PR shop when she was dispatched to help one of the firm’s major clients: Ivanka Trump. At the time, Trump’s daughter was expanding her fashion line, and Hicks was enlisted to pitch in—and even do a bit of modeling, appearing online in a practical mint-colored dress, black clutch, and heels, all from the Ivanka Trump collection.

END_OF_DOCUMENT_TOKEN_TO_BE_REPLACED 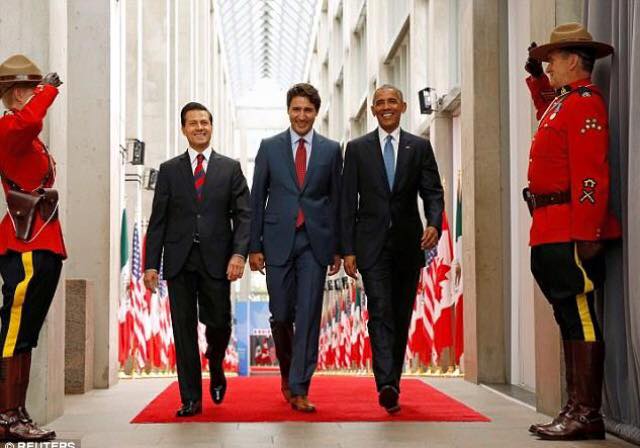 This photo is all over twitter and FB. It is so much win.

I’m sitting here waiting for my final paperwork for the house to arrive via email. Everything is done, closing is set, boxes are beginning to fill and pile up on any open floor space. I have a running list that seems to only get longer.

Bixby is very excited with the new house (we are watering because the seller has moved out of state, so the real estate agent and I are taking turns). As you can see, Bixby is helping water, too. 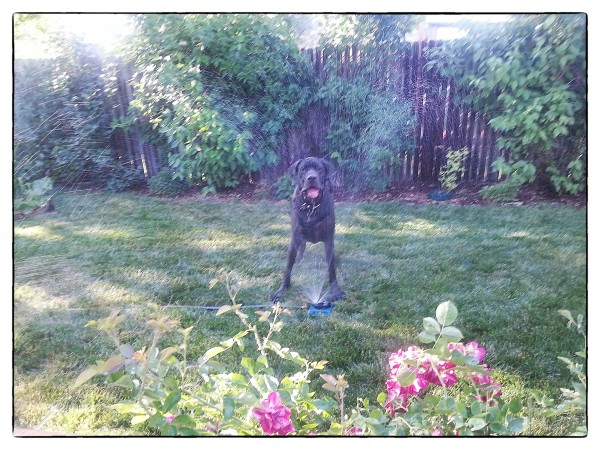 I will have recipes for you tomorrow – I’m actually going to a 4th of July cookout on Monday, between working and packing – so I had to go recipe hunting anyway.

Ok, how would you caption the photo at top of post? Consider this an open thread.

ETA: If you haven’t see Fiesta the Llama enjoying a good romp with a leaf blower, you should probably click here.

END_OF_DOCUMENT_TOKEN_TO_BE_REPLACED

Just left McCain fundraiser in DC. Happy to donate. But question occurred to me –why Senate reelection? Why not an indie run for President?

All right, we've had our fun, but the Bill Kristol meme has gone too far. https://t.co/ttNvO7rVWc

Dude must be aware that his predictions have become a standing joke, right? When even the VDare white supremacists start rolling their eyes, surely Bill ‘Always Rong’ Kristol must realize he’s worn out his patter, right?

You’d think he’d step aside, if only for the sake of the rising generation of Repub japesters…

And I want to win the lottery, if only I could remember to buy the tickets. My chances, still better!

Apart from mocking the Repubs, what’s on the agenda for the evening?

END_OF_DOCUMENT_TOKEN_TO_BE_REPLACED 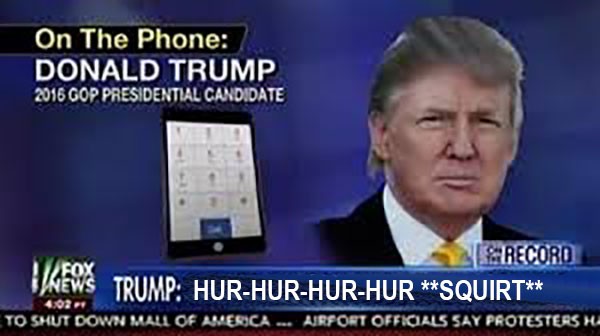 Did Donald Trump use a secret phone console to listen in on guest and employee calls at his Mar-A-Lago resort? Probably! Via Buzzfeed:

At Mar-a-Lago, the Palm Beach resort he runs as a club for paying guests and celebrities, Donald Trump had a telephone console installed in his bedroom that acted like a switchboard, connecting to every phone extension on the estate, according to six former workers…

BuzzFeed News spoke with six former employees familiar with the phone system at the estate. Four of them — speaking on condition of anonymity because they signed nondisclosure agreements — said that Trump listened in on phone calls at the club during the mid-2000s. They did not know if he eavesdropped more recently….

“He listened in,” said one source with deep knowledge of the working of the phones and Trump’s phone use. This person added that workers were told to be aware of it. For example, this source recalled a time when a staff member was on the phone with a club member. During the phone call, Trump called the staff member on another line to weigh in on the very issue that was being discussed. “There is no other way you could know what that conversation was about unless you were eavesdropping,” this source said.

A second source said he had direct knowledge that Trump “could pick up the phone in the bedroom and listen to any conversation that was going on.” This person said Trump used it “to eavesdrop.” This source said that some staff, who used a separate switchboard, knew when Trump was listening in on calls, because when he did, a light on that switchboard would come on…

Velez called it “ridiculous” that Trump could listen in on phone calls. Instead, Velez said, Trump used the console just so that he would not have to use a dial pad or call the operator. “Trying to remember extensions to every suite is impossible,” he said.

Yeah…it makes a lot more sense to install a console with a line to every suite instead of issuing a phone directory.

[T]he tycoon’s former butler, Anthony Senecal…maintains that this was for simplicity’s sake. “A lot of his friends stayed at Mar-a-Lago and he didn’t want to go through the front desk.”

Senecal said he did not know whether the phone could be used by Trump to eavesdrop on calls. “As far as listening in I can’t believe he would ever do that. I don’t know that he ever did that. I can’t see him doing that.”