You are here: Home / Archives for Manic Progressive

My therapist said I have to stop reading and writing about Putin’s useful idiots on “the left”. It’s hard to top this from LG&M and anyway:

Watching Glenn Greenwald desperately fling his hands and talk VERY LOUD to dissemble from his role in electing Donald Trump through funneling everything about Hillary Clinton the Russian propaganda arm known as Wikileaks gave him throughout the election is pathetic. Only Greenwald and Katrina vanden Heuvel know the real truth–that by focusing on Russian interference in American elections, that we are engaging in a NEW COLD WAR that makes any criticism of Glenn NEO-MCCARTHYISM! If you don’t believe this YOU ARE A DESPICABLE LIAR!!!! AND A REDBAITER YOU JOE MCCARTHY YOU!!

END_OF_DOCUMENT_TOKEN_TO_BE_REPLACED

The right-wing talking points around the Flynn-Trump-Russia-Peepee story are coalescing around this “it’s not Flynn’s actions that are illegal, it’s the leaking about them from anti-Trump forces that’s illegal”. It won’t surprise you to learn that this is Glenn Greenwald’s take on it:

I don't agree with all of it but this @EliLake article on Flynn has a sober, informative discussion of key issues https://t.co/6LPVZXVY80

I have nothing special against Glenn Greenwald, and I read and enjoy The Intercept. A few years ago, he posted a spittle-flecked screed against me and against this blog. You can read it for yourself, if you have the time, but the TL;DR is that he’s a rageaholic. And that’s cool. Anger can be power. But it can lead you to funny places. Like hating Hillary Clinton so much that you become a stooge for Trump, and, by extension, a stooge for Vladimir Putin.

Likewise, it wasn’t so long ago that Eli Lake was leading the #NeverTrump charge. Then, after Obama let the UN Resolution criticizing West Bank settlements go through, Lake started frothing at the mouth and also became a stooge for Trump, and, by extension, a stooge for Vladimir Putin.

When Wikileaks was dumping boring minutiae from Hillary Clinton’s emails, most of which were of course secured by Russian hackers, Greenwald thought that leaks were great, sunlight was the best disinfectant, and so on. Now, any leaks against Dear Leader Trump are the work of Deep State traitors who belong in jail. Likewise, when Saint Petraeus was being prosecuted for mishandling intel, Lake thought unauthorized disclosures were nothing less than the “fabric of the national security state”. Now, they’re apparently a threat against the Republic that should be prosecuted under the full extent of the law.

The inconsistency here is so laughable that it’s not worth elaborating on, so I won’t.

I’ve seen this before with a lot of national journalists and pseudo-journalists. For all the lecturing they give people like me about being unserious partisans, you think they might, just for a minute, think about how much of their own agenda is driven by personal hatred and grievances.

END_OF_DOCUMENT_TOKEN_TO_BE_REPLACED 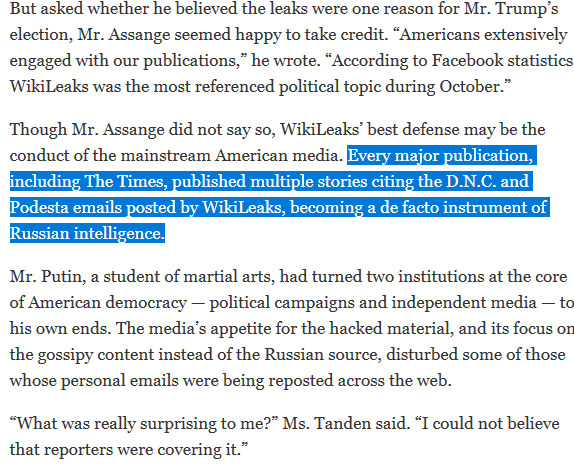 The long, gory details on how Russia helped to elect the Trump duma with an assist from clueless and over their head DNC employees (whose names I’ve written down and put in my MARK PENN FAIL TRAIN FILE because they should never fucking work for a Democratic candidate again) and a willing media. Meanwhile, at the Intercept, they’re still not convinced Russia did this and want a document dump so Russia and Trump can figure out how the intelligence services know what they know and/or fuck up any attempt at any future legal action and subsequent prosecution. And if you point this out, I’m sure you hate freedom.

And before you ask, yes, there is a fundamental fucking difference between whistleblowers leaking evidence of wrongdoing on the part of the American government and a foreign power engaging in cyber warfare and interfering in American elections, even though some people can’t seem to figure that out.

END_OF_DOCUMENT_TOKEN_TO_BE_REPLACED

This is kind of hilarious. I followed Corey Robin on FB because I like to see what other people think (a good thing), and sometimes I politely commented. I just got unfriended after this exchange: 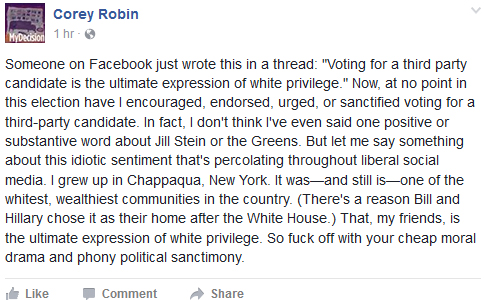 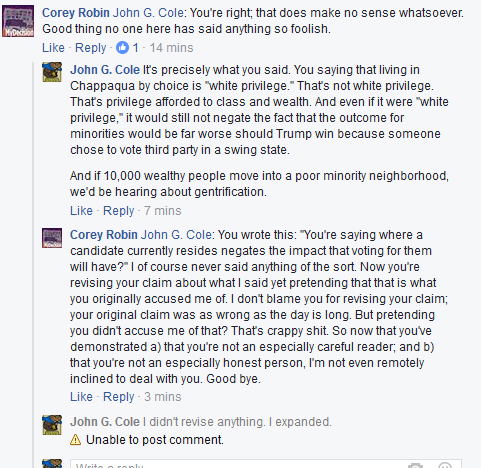 That’s just sad and funny on so many levels. And I didn’t change my initial remarks- I initially assumed he was smart enough to go from point a to point b. He wasn’t, so I extended them.

I’ve seen this over and over again with these guys. Zaid Jilani, Freddie de Boer, that Bruenig fellow.

In all honesty, what did I say or do that was so offensive here?

END_OF_DOCUMENT_TOKEN_TO_BE_REPLACED

One positive thing about the Trump candidacy is that it has a way of confirming long-held suspicions, such as that the GOP base’s yearning for white nationalist politics remains strong and extends well beyond Dixie. Another is that Green Party favorite Julian Assange of WikiLeaks is basically the Milo Yiannopoulos of the tie-dyed set. Consider:

US poll: Who will you vote to become President?

Links to The Gateway Pundit, aka, the Stupidest Man on the Internet, as if he were a credible source — check:

Seems like there’s very little “Wiki” involved in WikiLeaks anymore, so what we’re getting is information filtered through Assange’s anti-Clinton bile. Jill Stein recently called Assange a hero, which underscores her poor judgement. Whatever good will the organization generated by publishing material that exposed war criminals in Iraq is now being squandered by a founder who is, like Roger Stone and Breitbart.com, functioning as a oppo research and propaganda outlet for the Donald Trump campaign. Good to know.

*After strongly implying in an interview earlier this week that murdered DNC staffer Seth Rich was a WikiLeaks source, Assange walked it back a bit yesterday by reissuing a statement that neither confirmed nor denied a link to Rich. But the hint was picked up by the kooks as Assange intended, much as Trump’s dogwhistles find receptive ears.

END_OF_DOCUMENT_TOKEN_TO_BE_REPLACED

Dan Savage is having a fight with the Greens (details here), and part of it involves a good look at their perennial candidate, “Dr” Jill Stein.  Here’s a taste of her bullshit:

I don’t know if we have an “official” stance [on vaccination], but I can tell you my personal stance at this point. According to the most recent review of vaccination policies across the globe, mandatory vaccination that doesn’t allow for medical exemptions is practically unheard of. In most countries, people trust their regulatory agencies and have very high rates of vaccination through voluntary programs. In the US, however, regulatory agencies are routinely packed with corporate lobbyists and CEOs. So the foxes are guarding the chicken coop as usual in the US. So who wouldn’t be skeptical? […]

For homeopathy, just because something is untested doesn’t mean it’s safe. […]

What a fucking loon.

END_OF_DOCUMENT_TOKEN_TO_BE_REPLACED

We’ll be meeting at the Tune Inn at 331 Pennslvania Ave SE for drinks and munchies this coming Sunday, July 3rd starting around 8:00 PM

Hopefully it will be quiet enough for good conversation.