You are here: Home / Archives for Nature & Respite / Something Good Open Thread

#CitizenScience collaboration ??? : I send home raw pictures of Jupiter, and talented people around the world turn them into everything from detailed scientific imagery to beautiful works of art. Full video: https://t.co/YIwpDufF6Q pic.twitter.com/ogkYKdw7HO

In the arms of the maelstrom: in this view from JunoCam, bright white clouds can be seen popping up in and around the arms of a rotating northern hemisphere storm. https://t.co/p5ms1ZhFa2 pic.twitter.com/p0s1KlCPvL

I have had a crappy, crappy few days, so I was glad when this came across my twitter feed. Sometimes I need to look outside myself to remember there are good things out there.

I hope your days are better.

END_OF_DOCUMENT_TOKEN_TO_BE_REPLACED 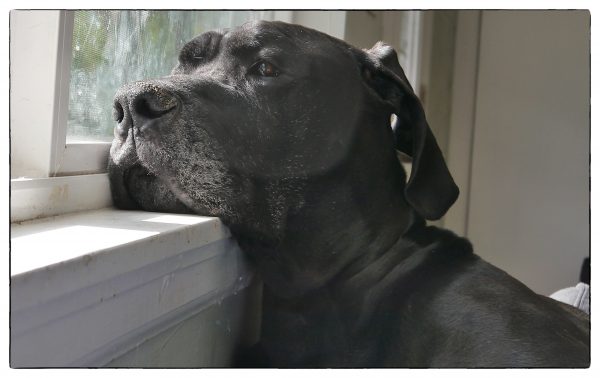 Look at that face

It’s Monday, so I’m swamped with work stuff (okay and gardening stuff – one of my clients gave me a gift certificate to the local garden shop and I HAD to use it today, and then of course plant stuff, too). But I wanted to give you an update on the Big Guy, since I hadn’t in a while.

It’s mostly because things are pretty much back to normal. He gets stronger every day. His gait is almost normal, most of the sway is gone and he’s stable on all four legs. I pinch myself at how lucky we are and the nightmare of a month ago is fading. We are down to treatment every two weeks. I caught Scout literally standing with her front legs on his back yesterday and he was completely steady. Unheard of just a week ago.

And I cannot thank you enough for giving me a space to share it all – I was so overwhelmed with sadness and fear and leaning on you guys helped get me through the weeks.

So you good people get bonus Scout: 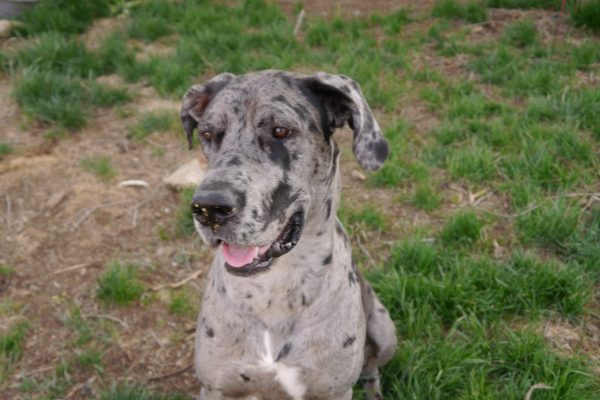 I will try and get you some Pearl photos tomorrow. She’s doing well and has pretty much fully integrated with Mabel and Maddie – though I have some funny stories about that. Also, I could use more pet photos if you want to send them to me. I’m determined to keep up these respite threads – if only for my own sanity.

END_OF_DOCUMENT_TOKEN_TO_BE_REPLACED

Buffy is 3 and was adopted from a poultry auction. She loves the wind in her feathers. And that’s a Barbie helmet – Denmark, Australia – Maria Arima

I don’t know why, but this photo of Pearl just quacks me up: 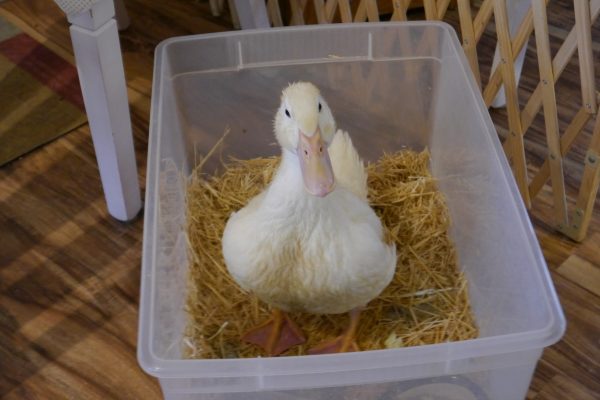 Like, “why am I in a box?” She is in a much bigger box now, so I get fewer of those looks.

She’s doing well. Losing her down (my poor house, it’s like someone ripped open a pillow and spread it everywhere) and getting more feathers. Still doesn’t have her wing feathers yet. We are spending time outside with the other ducks…which is going okay. Pool time seems to be where they are most comfortable. Friends are bringing me a puppy yard to give her a space to safely hang out while Maddie and Mabel check her out. More photos/update here.

I had to run errands this afternoon and about 10 minutes from the house, I realized I secured the cats and the dogs, but forgot to secure the duck. She doesn’t really jump out of her little nest box, but I usually secure her in the kitchen. I wasn’t too worried, but when I got home, I came in through the garage – no duck in the kitchen. I go looking for her (not hard, she NEVER shuts up). She was hanging with the dogs. Bixby looked exasperated. Scout, amused. There was a minimal mess and no one was bleeding. I’ll call it a win.

And representing mammals today, eclare sent this to me a while back and it made me laugh. 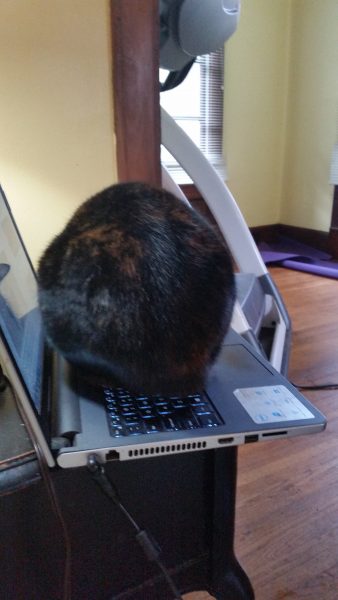 So Mary G submits a sweet story about a kitty who rides on the shoulder of her new bestie, and this is the catitude I get from mine. That used to be my laptop, now it is Jacy’s

Those of us with cats totally get this.

END_OF_DOCUMENT_TOKEN_TO_BE_REPLACED 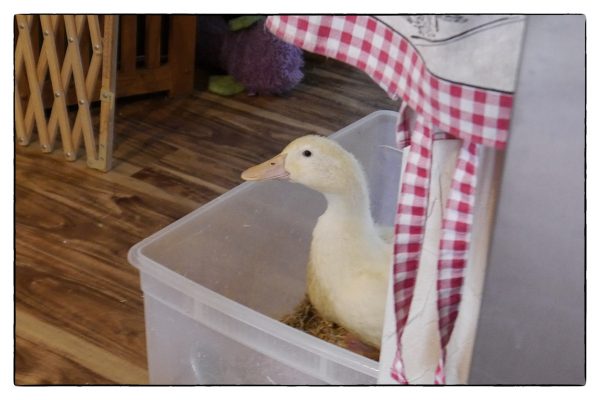 Anatidaephobia: The fear that somewhere in the world a duck is watching you.

Mary may have had a little snowy white lamb, but I have a creamy white duckling who follows me EVERYWHERE. This is unexpected. Charming.  And a little troubling. There is a full update here.

I have to get some work done, as you can imagine, there have been many distractions today.

I’ll do my best to use the incredible cuteness only for good and keep us all distracted.

END_OF_DOCUMENT_TOKEN_TO_BE_REPLACED

Screw bad news today. Our home has been turned upside down by this noisy thing: 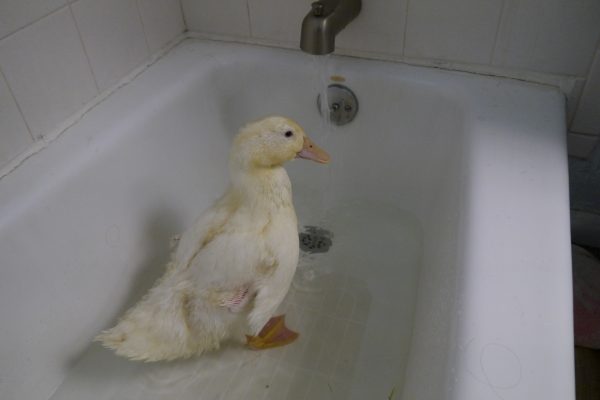 I’ve named it Pearl/Earl.  We won’t know if its a boy or girl until it has its full feathers. It’s a Pekin duck, about 7 weeks old. I am leaning toward female because of the quack, but that’s not as reliable as the tail feather.

It followed a very sweet woman to her car from a local park where it was clearly abandoned (let me add testily here: don’t get ducks, chicks or bunnies for Easter, people, if you aren’t going to keep them for life!!)

She really has fallen in love and wanted to keep it, but just isn’t a place to do so. We are equipped here and I told her she could visit anytime she wanted. If it turns out she can’t live without, I’ll help her get set up for life with ducks.

We are settling in – but difficult since this handraised duckling wants nothing more than to sit in my lap and heaven-forbid I leave the room!

I have yet to get pup and duck photos, but they are doing okay together.

And then there was this last night: 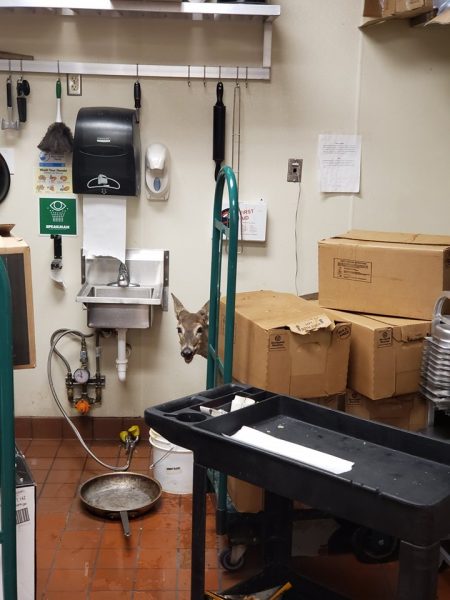 According to our local police, this little one decided to visit a very busy market:

…last night (Monday, 5/6/19) Longmont had a deer make her way inside the King Soopers on South Hover Street and take a stroll through the produce section and deli. Some shelves were knocked over and the deer incurred some minor injuries. Longmont officers responded and the deer remained in a section of King Soopers until Colorado Parks and Wildlife arrived. Eventually, the deer was removed and released back into the wild.

Wondering if the deer should have considered ClickList for an outside pick up?

Just another day around here…

END_OF_DOCUMENT_TOKEN_TO_BE_REPLACED 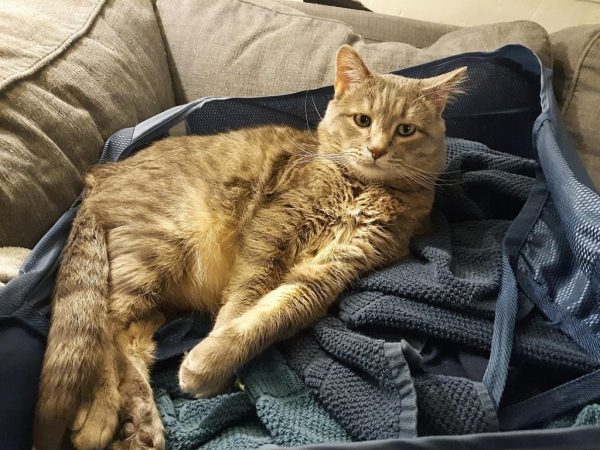 Gabe helping with the laundry. Don’t know how I’d get it done without him. LOL

So how many of you remember how Maddie and Mabel came to live with me? – Here’s your refresher because… 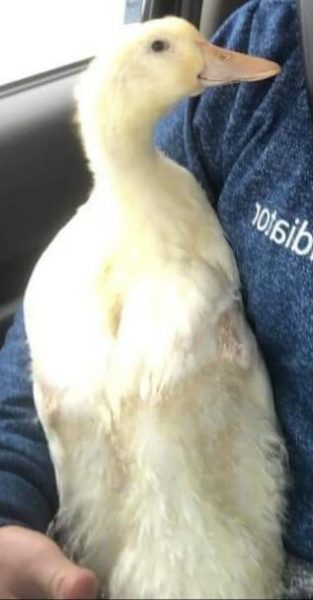 I don’t have a lot of information except he/she is most likely a Pekin duck, about 6-7 weeks old. Found wandering at a local park/pond. Followed a woman to her car, she brought it home. Needed a good home and I’ve been looking for a third duck. I live in fear of losing one and the other being devastated – they do not do well alone.

We’ll meet tomorrow and see if it’s a match.

END_OF_DOCUMENT_TOKEN_TO_BE_REPLACED

So this gentleman rescued and released a baby fawn with an injured leg in 2015. The video just melted me. The second video is of the mother deer and her twins still visiting his farm.

A deer doe abandoned one of her twin fawns, the fawn had injured leg and could not keep up with the mother. I do not support keeping wild animals as a pets, but this was special situation. The baby deer was healed and released back to her real mother. Update: The doe and two her fawns is still around, we seen them through the summer and the autumn.

The bears and wolves in the video are incredible.  I’d love to know where he lives. His youtube page says his home is planet earth and more specifically the United States. I’m guessing Alaska? His entire page is full of amazing animal stories.

If you click through to YouTube on the first video, he has more videos of raising the fawn. He really did a good job. We have warnings every spring not to think fawns are abandoned because they are alone – Does leave them all day and come back at night. This was not the case and his efforts to reintroduce this fawn to the wild are nothing but heroic.

Those who follow me on the book of faces might have seen the video of the Cat and the Grizzly eating daisies. Same guy.