Lock Him Up…Lock Them All Up

So it appears that @SpeakerPelosi is throwing a New Year’s Eve party inside @realDonaldTrump’s head. #IMPOTUS https://t.co/SlGNCSOqYY

Rudy talking about testifying in the Senate and representing Trump in the trial and turning it into a racketeering case (???) is the only way 2019 could have ended. pic.twitter.com/VxXgXRMRSl

Re: Trump at Mar-a-Lago: "The people around him are increasingly the true believers and it’s almost like a religious revival when he shows up there. They jump up and down, they shout, they scream his praises." https://t.co/tyWlEMJYhV

… Over the past three years, Trump has spent his days at Mar-a-Lago — which he calls “The Southern White House” — surrounded by an unpredictable cast of Palm Beach residents, wedding guests and the characters Trump invites down for a meeting or a round of golf. It’s often led to a more freewheeling atmosphere, in which the president feels more comfortable to freely meet with people, knowing he’s outside the strictures of official Washington…

“It was a bunch of hangers-on,” that official said. “You just don’t want to put the president in the same room with some folks … who were maybe closer to him when he was a developer or living in New York than you’d want, who were controversial in their own right, whether they were involved in lawsuits or other things.”

Back then, “every guy would bring a friend and the friend was some guy from some country or [a] lobbyist,” said a person close to the White House. “I think they put the kibosh on that and became a lot tougher on screening and who members were bringing as guests.”

The person remembered one time when a member showed up with people from a sub-Saharan African country who wanted to talk to Trump. In a sign that staff were trying to put some limits on things, the individuals were turned away…

War criminals, serial rapists, global gangsters — no problem! But anyone whose skin is darker than Tiger Woods’…

Laurence Leamer, the author of “Mar-a-Lago: Inside the Gates of Power at Donald Trump’s Presidential Palace,” said one reason that Trump is in a better mood at the Palm Beach resort is because no members or visitors to Mar-a-Lago challenge Trump directly when they’re at his resort. Leamer noted that numerous one-time members who object to Trump’s policies resigned over their political differences.

“He can’t stand to be criticized or challenged. And when he asks you, ‘How am I doing?’ you just say ‘You’re doing great,’ that’s it, that’s what he wants to hear,” said Leamer, who has talked with Trump many times at Mar-a-Lago over the years…

END_OF_DOCUMENT_TOKEN_TO_BE_REPLACED

New: Lev Parnas is seeking permission to share a bunch of new material with House Intel, including the contents of an iPhonehttps://t.co/g1d538fbgG

Lev Parnas, a former Rudy Giuliani associate charged with financial crimes, is looking to share more material with congressional investigators, according to a letter his lawyer has sent to a federal judge. The letter, filed in court on Monday evening, indicates that the committee first tasked with helming the impeachment inquiry is gathering additional evidence about Trump World.

In the letter, Parnas’ lawyer Joseph Bondy said the Justice Department will share materials with his client on Tuesday that it seized from his home and at his arrest. The materials include documents and the contents of an iPhone. Bondy then asked Judge Paul Oetken of the Southern District of New York to allow him to share those materials with the House Intelligence Committee; a court order currently bars him from sharing them with anyone. The Justice Department has said it does not object to him giving the material to Congress…

Trump’s relationship with Ukraine—in particular through his intermediary and personal lawyer Giuliani—is at the center of the impeachment process. Parnas had a front-row seat to much of Giuliani’s Ukraine-related activity.

Federal authorities arrested Parnas and his associate Igor Fruman at Dulles Airport in October and charged them with conspiring to illegally funnel money from a foreign national into an American election. For many months before their arrest, the two worked with Giuliani to investigate allegations about former Vice President Joe Biden’s son Hunter, who served for a time on the board of a scandal-dogged Ukrainian energy company…

Parnas and Fruman, both Soviet-born U.S. citizens, made hefty political contributions through an entity they started called Global Energy Partners. And they built connections on Capitol Hill; after then-Rep. Pete Sessions sent a letter to Secretary of State Mike Pompeo calling for Yovanovitch’s removal, a PAC the pair supported shelled out a huge sum to boost his re-election bid. Sessions’ name was also batted around within the Trump administration as a potential replacement for Yovanovitch, though any efforts to install him there didn’t get traction.

Parnas and Fruman have both pleaded not guilty. And Parnas indicated he would cooperate with the congressional impeachment inquiry. Because of his close proximity to Giuliani, he may have significant visibility into Giuliani’s actions that other witnesses lack. For instance, a senior Zelensky aide confirmed to The Daily Beast that Parnas was present for a meeting he had with Giuliani where they discussed the U.S.-Ukraine relationship…

Guess we’ll know from the Oval Office Occupant’s tweet-stream — or Giuliani’s — how successful efforts to hide this news from him have been. As if the festivities at Mar-A-Largo weren’t fraught enough already.

Credit for Individual-1’s obsession with appearances, though; Parnas looks exactly like the bumbling minion in a spy caper who inadvertently betrays Mr. Big, doesn’t he?

END_OF_DOCUMENT_TOKEN_TO_BE_REPLACED

Donald J. Trump got the highest number of impeachment votes in history.

One of our most precious rights as Americans is the right to determine who our leaders are.

The president abused his powers to cheat in the next election and rob us of that right. Then he obstructed Congress to cover it up.

Impeachment is the only remedy. #DefendOurDemocracy

It is important to remember that today's historic vote in the House is born out of patriotism and love of country. It is about having the courage to speak truth and pursue justice.

Donald Trump has abused our diplomatic relationships and undermined our national security for his own personal, political gain. By voting to impeach him, the House has taken an important step to hold him accountable. I'm ready to fulfill my constitutional duty in the Senate.

Steny Hoyer shouts out the 65m who voted for HRC.

The look Nancy Pelosi gave her caucus when some Dems started to applaud after she announced the first article of impeachment passed is a look I know well as a fellow mom of five. pic.twitter.com/PWLT5aXqPQ

OK. They just did. https://t.co/OBoQw9BJtn

I’m case you’re we’re wondering what Trump was saying at the exact moment they reached 216 votes for impeachment, it was another insane story about how he thinks stealth fighters are actually invisible. pic.twitter.com/IPlRHinz2m

I hope Trump never fires whoever wrote this statement. https://t.co/YT53WC79HM

END_OF_DOCUMENT_TOKEN_TO_BE_REPLACED

I chatted today with the pastor of a Claremont church which erected a nativity scene depicting Jesus, Mary and Joseph as refugees separated in cages https://t.co/MGl82HTZ3n

… Ristine, who has served as the church’s lead pastor only since July, said the church often uses its Nativity scene to tackle a societal issue. Southern California’s homelessness crisis has been invoked in past depictions, she said. A more traditional Nativity scene, showing the Holy Family reunited, can be found inside the church, which serves a congregation of about 300 people, Ristine said.

“We don’t see it as political; we see it as theological. I’m getting responses from people I don’t know … I am having people tell me that it moved them to tears,” she said. “So if the Holy Family and the imagery of the Holy Family and the imagery of a Nativity is something you hold dear, and you see them separated, then that’s going to spark compassion in many people.”…

Rep Cicilline "all of the potential articles of impeachment are on the table." pic.twitter.com/t3E0PJ2M7J

Dug out my copy of The Friends of Richard Nixon, written by former Assistant U.S. Attorney George V. Higgins, and found this in the introduction:

… Thinking ahead, in criminal business, is of surpassing importance, even more so than in legitimate commerce and in politics, where it certainly does no harm. The professional outlaw seldom loses sight of the possibility that he, or someone working for him, may make a mistake, or suffer some bad luck, or succumb to overconfidence and get hooked for something big because he bungled something small. He is on guard from the instant he begins to make his operational plans (he does not cause his conferences to be tape-recorded, and he invites to those discussions only those with a pressing need to know, and he does not confide this agenda to the uninvited). If something goes wrong, and the cops come, he is not reduced to frantic, random foraging in the early morning hours, for a willing though sleepy attorney, and a bail bondsman. Nor does he negligently permit his operatives to carry his phone number in their belongings, helpfully annotated to show that, yes, it is his number. The practical crook is a man of provident humility, who sees to it, in advance, that investigation will be arduous, protracted, dispiritingly unproductive, and, in the long run, unsuccessful. By that foresight in frustrating the orderly procedures of American criminal justice (by leaving nothing to chance, and very little to be found), he exonerates himself from the alternative, more difficult, and vastly more dangerous obligation to obstruct the processes of American criminal justice. There is no substitute for knowing what you’re doing…

It looks to be Rudy Giuliani’s week for going under the Trump bus. Mr. Giuliani, during his long career flirting with the romance of Big Crime, might’ve done himself better if his reading (okay, viewing) had included more narratives from the side of the prosecution, IMO.

And finally, a happy dream to start the week…

AP Interview: Elizabeth Warren says she believes Americans are ready for a presidential ticket with two women at the top, rejecting concerns from some Democrats that a woman can't beat President Trump. https://t.co/8wHcarzJTj

END_OF_DOCUMENT_TOKEN_TO_BE_REPLACED

The impeachment inquiry into Donald J. Trump, the 45th President of the United States, uncovered a months-long effort by President Trump to use the powers of his office to solicit foreign interference on his behalf in the 2020 election. As described in this executive summary and the report that follows, President Trump’s scheme subverted U.S. foreign policy toward Ukraine and undermined our national security in favor of two politically motivated investigations that would help his presidential reelection campaign. The President demanded that the newly elected Ukrainian president, Volodymyr Zelensky, publicly announce investigations into a political rival that he apparently feared the most, former Vice President Joe Biden, and into a discredited theory that it was Ukraine, not Russia, that interfered in the 2016 presidential election. To compel the Ukrainian President to do his political bidding, President Trump conditioned two official acts on the public announcement of the investigations: a coveted White House visit and critical U.S. military assistance Ukraine needed to fight its Russian adversary.

That is the language of bribery. 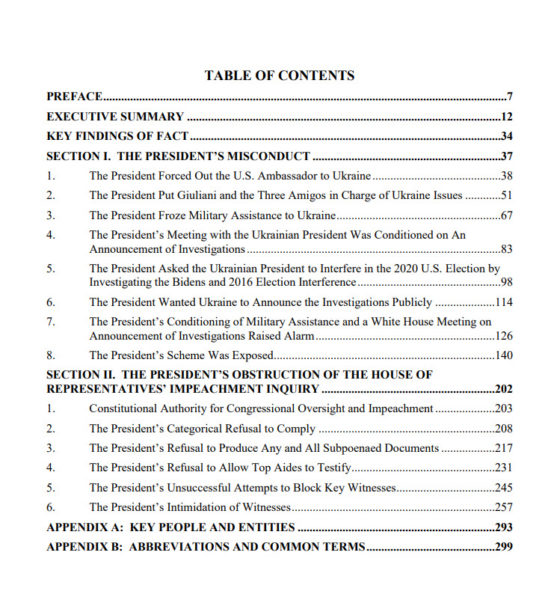 END_OF_DOCUMENT_TOKEN_TO_BE_REPLACED

I asked Pelosi specifically about this Thursday. Her response was blunt: “absolutely not.” Waiting for courts means July or later for all this testimony. They’ll instead push impeachment next 2 months & continue these investigations/hearings next year. https://t.co/mxEoINQEQd

By 50-43, Americans say Trump should be impeached *and removed*

56% say Trump's pressure on Ukraine was about benefiting himself politically

Support for Trump impeachment and removal up three points since last week's hearings to 50%.

He appears to be committing impeachable crimes in the middle of an impeachment. I understand the Democratic desire to keep this thing narrow, but he’s making it pretty close to impossible.

Adam Schiff said in a letter today that his committee is preparing a report on its investigation into Trump and Ukraine, which will be transmitted to the House Judiciary Committee shortly after Thanksgiving. https://t.co/DXIQPxEPZE

END_OF_DOCUMENT_TOKEN_TO_BE_REPLACED 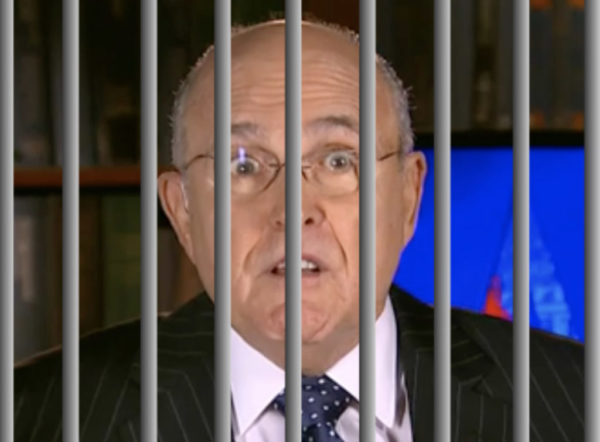