You are here: Home / Archives for Shitheads

I don’t think any of you fully appreciate how extraordinarily difficult it is to replace a desktop power supply an re-wire a pc with a cat and two puppies in your household.

END_OF_DOCUMENT_TOKEN_TO_BE_REPLACED

Gotta love the cojones on this jackass:

Patriots owner Robert Kraft made a surprise appearance at the team’s opening news conference of Super Bowl XLIV on Monday, saying the NFL owed them an apology if its investigation over deflated footballs doesn’t uncover wrongdoing.

“If the Wells investigation is not able to definitively determine that our organization tampered with the air pressure on the footballs, I would expect and hope that the league would apologize to our entire team, and in particular, coach [Bill] Belichick and Tom Brady for what they have had to endure this past week,” Kraft said, referring to attorney Ted Wells, who is leading the investigation with NFL executive vice president Jeff Pash

Shorter Bob Kraft- “If you can’t prove precisely HOW we were cheating, you owe us an apology.”

END_OF_DOCUMENT_TOKEN_TO_BE_REPLACED

From the “You Can’t Make This Stuff Up” department, courtesy valued commentor LAMH36, Bloomberg reports:

Ferguson, Missouri, which is recovering from riots following the August shooting death of an unarmed black teenager by a white policeman, plans to close a budget gap by boosting revenue from public-safety fines and tapping reserves…

To close a projected deficit for fiscal 2014, which ended June 30, the municipality will deplete a $10 million capital-projects reserve, Jeffrey Blume, Ferguson’s finance director, said in a telephone interview. For the current year, the city is budgeting for higher receipts from police-issued tickets.

“There are a number of things going on in 2014 and one is a revenue shortfall that we anticipate making up in 2015,” Blume said. “There’s about a million-dollar increase in public-safety fines to make up the difference.”

Revenue from violations, which already represents the city’s second-largest source of cash after sales taxes, will rise to 15.7 percent of receipts in fiscal 2015, from a projected 11.8 percent this year, he said. In 2013, fines brought in $2.2 million, or 11.8 percent of the city’s $18.62 million in annual revenue, according to budget documents…
***********
Two bills that were pre-filed last week in the State Senate would limit what municipalities can collect from public-safety fines.

‘‘For Ferguson to respond to all of this and say that increasing ticketing was a good idea is outrageous,” Scott Sifton, a Missouri state senator who sponsored one of the pieces of legislation, said in a telephone interview.

The bills will be reviewed and voted on after the legislature reconvenes on Jan. 7, he said. If approved, the measures would take effect in August at the earliest, Sifton said….

Let’s hope Ferguson’s budgeting geniuses get together, over the holiday, with some relatives who can tell them to stop eating the smart pills.

END_OF_DOCUMENT_TOKEN_TO_BE_REPLACED

And people wonder why victims of rape and sexual assault don’t come forward: 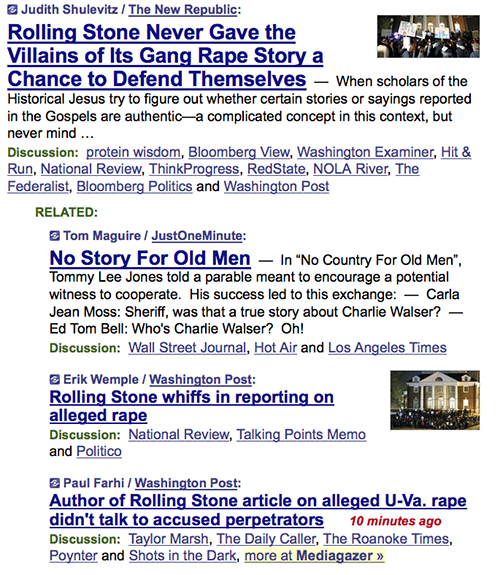 Rape now gets the “both sides do it” treatment from our failed media experiment. If the alleged rapists want to push their side of the story, they can leave behind the veil of anonymity and tell their side in court.

And fuck the New Republic and the Washington Post for pushing this shit. The Rolling Stone rape piece officially has now received more public scrutiny that all of Judy Miller’s WMD claims prior to the Iraq war.

END_OF_DOCUMENT_TOKEN_TO_BE_REPLACED

As Election Day nears, the battle for King Shit of Turd Mountain, i.e., the contest between Charlie Crist and Rick Scott for governor of Florida, has produced a shit-storm of negative advertising. Commercial after commercial projects images of the combatants in sinister poses and evil lighting, accompanied by strained voiceover accounts of their misdeeds in office.

Obviously, the Crist Photoshop team has the cushier job: I don’t think there’s a photo in existence of Rick Scott where he doesn’t look like an alien creature from a reptile off-world come to foreclose an orphanage and grind the inhabitants into feed-paste. 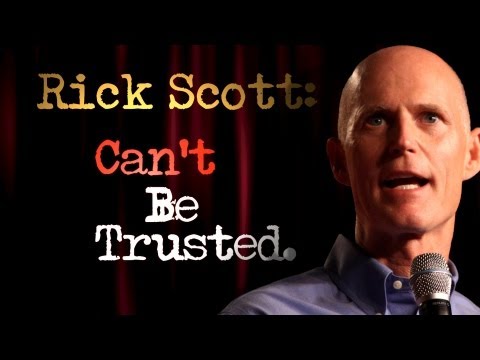 But yesterday, there was an ad I hadn’t seen before featuring former Governor Jeb Bush excoriating former ally Charlie Crist as a career politician only interested in personal aggrandizement. The stones. The fucking stones on those Bushes.

Bush 2016: The Restoration is apparently a thing. Here’s a puke-inducing paragraph from a NYT article published yesterday about the alleged upswing in Jeb Bush’s political prospects:

Just six years ago, at the end of the last tumultuous Bush presidency, this would have been all but unthinkable. But President Obama’s troubles, the internal divisions of the Republican Party, a newfound nostalgia for the first Bush presidency and a modest softening of views about the second have changed the dynamics enough to make plausible another Bush candidacy. And while Jeb Bush wants to run as his own man, invariably this is a family with something to prove.

Unpacking that paragraph is like opening a rancid diaper pail, but let’s brace ourselves and give it a go: “President Obama’s troubles?” Yes, he has them, mostly traceable to Stately Bush Manor and exacerbated by the Bush-aligned vandals in Congress.

“Internal divisions of the Republican Party?” Oh, you mean that GOP rebranding campaign gone awry in which the Republican Party nominated scads of pekoe-huffing troglodytes who lost winnable races and turned the GOP presidential primary into a crackpot bake-off?

“Newfound nostalgia for the first Bush presidency and a modest softening of views about the second?” Bush I is a doddering old fart who occasionally weeps with shame in public over his fuck-up namesake. He will be forever overshadowed by the half-wit he served as VP, and his son empowered a cabal of sociopaths to complete the cycle of destruction Poppy’s boss set into motion.

And now we’re seriously being asked to countenance another Bush run at 1600 Pennsylvania? Just shoot me now. (You can get away with it here in Florida — thanks to Jeb’s partnership with the NRA.) I can’t be objective because I utterly despise them all. But is there really a Bush restoration movement afoot outside of the Bushies, their minions and political columnists? Y’all help me out here: I haven’t seen any evidence of it.

God, that article. “This is a family with something to prove?” Fuck them. “The Bushes, Led by W., Rally to Make Jeb ’45’?” From the current generation until the sun goes supernova and vaporizes this planet, fuck the Bushes, and fuck the putrid media hacks who enable them by framing the ambitions of that clan of psychotic leeches as if writing a human interest piece on a sports dynasty.

When the Obama administration decided not to pursue its vile predecessors for their ghastly war crimes and corruption, I understood the rationale, even if I didn’t agree with it entirely. It would have paralyzed the government in the midst of a cascading global crisis.

But the question of justice denied aside, this spectacle of the Bush family rehab alone is evidence that the dirty fucking hippies were right: We should have driven a stake through the fat black heart of that bunch when we had the chance.

END_OF_DOCUMENT_TOKEN_TO_BE_REPLACED

Remember the Washington Post “whitewashing” of officer Darren Wilson yesterday by Kimberly Kindy and Sari Horwitz? Their twitter feeds have been oddly silent the past 24 hours, and it might be because of this:

But Melinek told MSNBC’s Lawrence O’Donnell on Wednesday that her comments had been taken “out of context” and that she believed the findings could be explained by other scenarios as well.

She and O’Donnell then walked through a variety of alternative situations in which the gunshot residue found on Brown’s hand — the key finding that suggested Brown had been reaching for Wilson’s gun — could have gotten there.

“I’m not saying that Brown going for the gun is the only explanation. I’m saying the officer said he was going for the gun and the right thumb wound supports that,” Melinek. “I have limited information. It could also be consistent with other scenarios. That’s the important thing. That’s why the witnesses need to speak to the grand jury and the grand jury needs to hear all the unbiased testimony and compare those statements to the physical evidence.”

I’ve been asking Kimberly Kindy and Sari Horwitz for comment, but since they refuse to respond to anyone, I thought out I would hunt down the public editor and complain to that person. It turns out there isn’t one. That position has been replaced with a Reader Representative, which is mostly just customer service bs. Currently serving in that role is fashion editor Alison Conglianese (I think- I can’t find anyone after her). I’d ask her, but she seems super busy today:

One of this season's plaid blanket scarves from @ZARA + a roundup of 15 more that I love on the blog today! http://t.co/Cja161DowG

Rounded up my 15 favorite blanket scarves on the blog today! Plus how I styled one I picked up from @ZARA this season http://t.co/Cja161DowG

I’m not a scarf man myself, so I can’t tell you if those are available on Amazon.

END_OF_DOCUMENT_TOKEN_TO_BE_REPLACED

I just received a press release for this book (click to embiggen), and I’m sure you’re all going to want to buy copies for friends, family and loved ones. From the email:

In what the New York Times described as “an insightful coming-of-age political autobiography”, New York Governor Andrew Cuomo reflects on his rise, humiliating fall, and surprising comeback in politics. In a series of compelling, behind-the-scenes stories, he recounts his dramatic personal and political setbacks, how he overcame them when he was written off, and reveals what he’s learned about effective political leadership that enabled him to enact marriage equality, gun safety, and balanced budgets.

The “humiliating fall” was a loss in the Democratic gubernatorial primary in 2002, where he withdrew after saying something stupid. Judging from this blurb, you’d think that, after that devastating setback, our plucky hero–a man born in poverty, raised by his single mother, and given no advantages in life–picked himself up, dusted himself off and valiantly worked to achieve the success he enjoys today. As if, motherfucker.

If any of you wonder whether this delusional, tone-deaf splitter is going to run for President, wonder no more. Why else would Mario’s kid hire a ghostwriter to turn his silver spoon, born-on-third-base life into a saga of hard work and redemption?

Open thread because this pile of steaming horseshit doesn’t deserve a thread to itself.